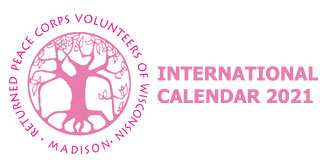 In January 1961, President John F. Kennedy’s inspiring inaugural speech challenged Americans with these words: Ask not what your country can do for you, but what you can do for your country. Less than three months later, President Kennedy signed an Executive Order establishing the Peace Corps to promote world peace and friendship through voluntary overseas service. Congressional approval came in September 1961, when the Peace Corps Act was signed, and by year-end, 750 volunteers had left to serve in 13 countries. Sixty years later, more than 240,000 volunteers have served for two+ years in 142 countries worldwide—the only break being the 2020 temporary evacuation of more than 7,300 volunteers due to the COVID-19 pandemic.

Peace Corps has changed and grown in its 60 years, but the spirit of peace, friendship, and service remains the same, and volunteers still are guided by these original three goals:

1. To help the people of interested countries meet their need for trained men and women

2. To help promote a better understanding of Americans on the part of peoples served

3. To help promote a better understanding of other peoples on the part of Americans

This calendar represents the backbone of the "3rd goal" work of the Returned Peace Corps Volunteers in Madison, WI. By celebrating the countries, cultures, and people served by Peace Corps, we seek a better understanding of people everywhere. In addition, in 33 years of publishing this calendar, more than $1.4 million in sales proceeds have supported development projects at home and abroad. Your purchase of this calendar makes this work possible—and helps us celebrate Peace Corps' first 60 years.

Thank you for your support!

The Returned Peace Corps Volunteers of Wisconsin-Madison is a group of RPCVs and other individuals who promote Peace Corps ideals in the following ways:


We invite you to get involved and explore the many ways that we accomplish those ideals. Join the group!

We are a member of the National Peace Corps Association (NPCA).