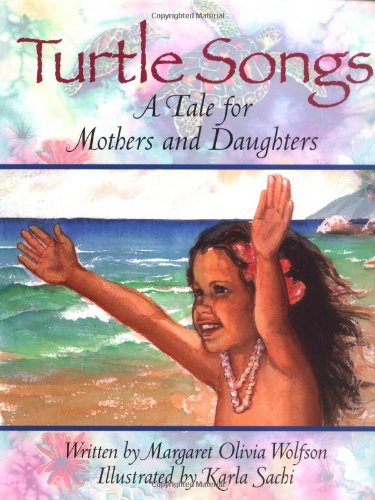 Summary: Based on a Fijian myth, a princess and her daughter are captured by intruders from another island. They sing in harmony and call to the sea gods, who transform them into sea turtles so that they might escape.

REVIEWS:
Publishers Weekly: In this story based on a Fijian myth, a princess and her daughter are saved from kidnappers by a storm that destroys their canoe and transforms the mother and daughter into sea turtles. As turtles, the pair returns to their island and promise to come whenever the villagers sing to them. Wolfson's (Marriage of the Rain Goddess) verbose retelling is competent, but does little to develop the relationship between the mother and daughter. The princess and her daughter's connection to the sea, before their transformation into turtles, also seem tenuous (the only clue the author offers is the princess's glancing wish, at one point, that she and her daughter were giant turtles). An afterword hints at the importance of sea turtles in the Fiji islands, but their mythical associations don't come through in the story itself. In her first children's book, Sachi uses bright South Sea colors, from the princess's flowing pink dress to the intense colors under the ocean's surface. But the illustrations do not always contribute to the narrative. The real strength of the artwork shows in the spreads of aquatic life: the sea turtles, dolphins and tropical fish seem to swim off the page. Ages 5-up.

School Library Journal: Kindergarten-Grade 3-A charming Fijian folktale is brought to life in this story about a brave Princess and her daughter. The ocean figures so centrally in their idyllic lives that the two wistfully fantasize about transforming themselves into "a pair of giant [sea] turtles." Their daydreams turn out to be hauntingly prophetic as ruffians from a neighboring island kidnap mother and daughter shortly thereafter. Huddled on the deck of their captors' boat, the Princess remembers her grandmother's instruction that song could conjure the magical sea god and she and her daughter begin the melodic incantation that will summon the ferocious elements. Soon the water and sky begin to churn and the canoe's passengers are tossed overboard. The Princess and Rani, however, are miraculously transformed into-what else-giant sea turtles, and they return to the shore to ask the women of their village not to mourn their loss. From that day on, the women summon the sea turtles with song to give themselves hope and consolation. Light-filled, lushly colored illustrations accompany this well-told tale. Folklore collections will benefit from this unusual addition, the origins of which are well documented in both the author's and artist's notes.