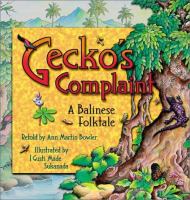 Summary: The endless flashing of fireflies disturbs a well-fed gecko's sleep. Gecko complains to the lion Raden, who is the king of the jungle, sending him on a tour of his domain. But each new animal's complaint leads Raden to yet another irritable animal, and it is only when he speaks to the Rain that Raden finally finds an answer for himself and all his subjects.

GoogleBooks: Filled with delightful characters and vivid illustrations, 'Gecko’s Complaint' is a story about those who are all too ready to see the faults of others while turning a blind eye to their own shortcomings. The story begins when a well-fed gecko complains to the royal lion Raden about being kept awake by fireflies. The king of the jungle sets out on a tour of his domain. Every animal he encounters seems to have a complaint about one of his neighbors. Only after speaking to the Rain does Raden find a solution to the problems. Children’s book writer Ann Martin Bowler’s retelling of a classic Balinese folktale is accompanied by the work of veteran illustrator, I Gusti Made Sukanada.

AMAZON: Featured as a "Top Pick" on TravelForKids.com, Gecko's Complaint tells the story of a Gecko who once lived on the island we now call Bali, in a jungle dense with flowers and vines.

After hundreds of fireflies disturb Gecko's sleep, he complains to kindly Raden, the jungle's lion leader. In his efforts to get to the bottom of Gecko's troubles, Raden discovers all too much complaining and far too many irritable animals. Can Raden help the animals with their troubles? Can peace and happiness return to the jungles of Bali?

A simple yet absolutely delightful Balinese folktale for kids, this bilingual edition, which features both English and Indonesian text, is a perfect introduction to the true spirit of Bali. The Indonesian island of Bali has a strong art and storytelling tradition—folktales that have been passed down from generation to generation. As a nation with over 18,000 islands, Indonesia has hundreds of traditional languages and cultures, each with myths and legends to tell. With its backdrop of volcanoes, earthquakes, dense jungles, diverse wildlife and people, it is not surprising that Indonesia is rich with fabulous, imaginative tales.

"Gecko's Complaint is a sparkling retelling of a classic Balinese folktale." —Bali Advisor

"Lovingly illustrated by Gusti Made Sukanada, this book shows a side of Bali that is not often seen." —Singapore Straits Times