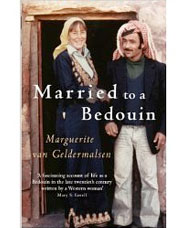 Synopsis: New Zealand born nurse Marguerite van Geldermalsen first visited the lost city Petra with a friend in 1978 on a sightseeing tour of the ancient world. Already looking forward to her beach holiday at the end of the trip, little did Maguerite know she was about to meet the man she would marry, the charismatic Mohammad Abdallah Othman, a Bedouin craftsman of the Manajah tribe. A life with Mohammad meant moving into his ancient cave and learning to love the regular tasks of baking shrak bread on an open fire and collecting water from the spring. As Marguerite feels herself becoming part of the Bedouin community, she is thankful for the twist in fate that has led her to this contented life. Marguerite’s light-hearted observations of the people she comes to love are as heart-warming as they are valuable, charting Bedouin traditions now lost to the modern world.