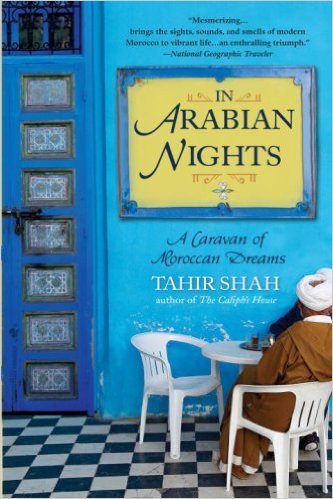 In Arabian Nights: A Caravan of Moroccan Dreams
Tahir Shah, 2009

Summary: In this entertaining jewel of a book, Tahir Shah sets off across Morocco on a bold new adventure worthy of the mythical Arabian Nights. As he wends his way through the labyrinthine medinas of Fez and Marrakech, traverses the Sahara sands, and samples the hospitality of ordinary Moroccans, Tahir collects a dazzling treasury of traditional wisdom stories, gleaned from the heritage of A Thousand and One Nights, which open the doors to layers of culture most visitors hardly realize exist. From master masons who labor only at night to Sufi wise men who write for soap operas, In Arabian Nights takes us on an unforgettable, offbeat, and utterly enchanted journey.

Named one of Time magazine’s Ten Best Books of the Year, Tahir Shah’s earlier The Caliph’s House was hailed by critics and compared to such travel classics as A Year in Provence and Under the Tuscan Sun. Now Shah takes us deeper into the real Casablanca to uncover mysteries hidden for centuries from Western eyes.