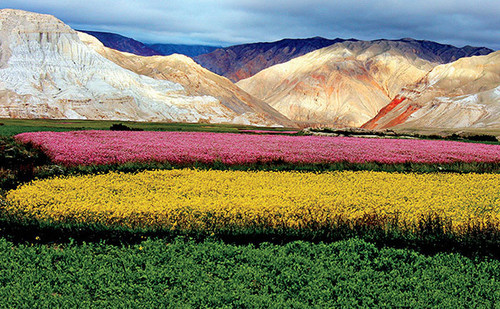 Nepal Landscape Notecard: set of 10 cards of one image + 10 envelopes

Lo-Manthang, Mustang district of northern Nepal: At 15,000 feet in the Himalayas lies the Tibetan kingdom of Lo-Manthang, in the Mustang district of northern Nepal. The current king, King Jigme, is the 25th monarch in a line that dates back to the 14th century. In the 15th and 16th centuries, the salt trade made Mustang a highly prosperous kingdom. Today, just outside the city gate are fields of barley, mustard, wheat, and buckwheat. The surrounding mountains hold magnificent monasteries with red-robed monks, bell-shaped chortens, or religious shrines, and caves rich with ancient Tibetan Buddhist paintings. Photo © 2011 Susan Caster; featured in the 2015 International Calendar