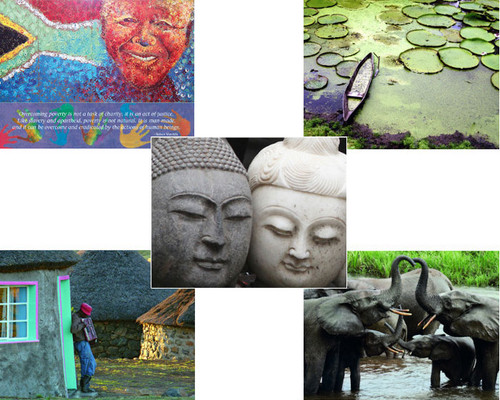 Bulk Discounts for Notecards Combo Set B (set of 10 cards)

Notecards Combo Set B: set of 10 cards of one image + 10 envelopes

A combined set of notecards featuring beautiful photos from past International Calendars—perfect for writing thank-you notes and for keeping in touch.

Combo Set B
Two of each of the following five notecards:

· Peru Lilies: Near Iquitos, Peru: From Iquitos, the largest city in the Peruvian rainforest, we travelled down the Amazon to a village of ribereños near the confluence of the Napo River and disembarked at the village landing. The ribereños live close to the land and water, as have their ancestors for centuries, fishing and raising crops. Much of life for the ribereños is defined by the cycles of the river and its many winding channels which can grow thick with algae and giant lily pads—as seen here by this solitary canoe. Photo © 2007 John Schilling; featured in the 2012 International Calendar

· China: Shanghai, China: Shanghai’s antique market consists of several blocks of makeshift stalls spilling out into the road, making it so narrow that only pedestrians can get by. Tables laden with Mao tee-shirts, Shanghai magnets, birdcages, dishes, and other wares assault the senses, but a dedicated search might reveal some real gems—such as these carved heads. Photo © 2012 Alison Hoeman; featured in the 2014 International Calendar

· Lesotho Musician: Bobete, Lesotho: In the rugged mountain kingdom of Lesotho, growing maize and raising sheep sustain the 200 people of Bobete, a small, rural village. The ground is rocky, dry and steep. Farming is a challenge. In winter, as the sun goes down, temperatures can plummet well below freezing. Village houses or rondavels are built of stone block and mud, and the thatched roofs are tightly woven to hold in warmth. As the sun sets, a villager, just returned from his fields, warms up on his accordion with a traditional, lively Basotho song. Photo © 2008 Karrin Parker; featured in the 2014 International Calendar

· Gabon: Ivindo National Park, Gabon: In a forest clearing, a parade of female elephants brings its young into the sun to play in the creek. The calves mimic their mothers, raising high their trunks, testing the air for the scent of danger. With their smaller tusks, ears, and bodies, forest elephants are able to move quickly through the trees. In 2002, Gabon officials established the national park system, setting aside more than 10% of the national patrimony for 13 conservation parks. More recently, the government introduced measures to secure the parks and protect wildlife from poaching and illegal ivory trading. Photo © 2008 Charles Eilers; featured in the 2013 International Calendar

· South Africa: Cape Town, South Africa: It was stunning. I turned a corner and there it was: a temporary plywood fence at a downtown construction site turned into a joyful work of art. Brilliant blues, dazzling yellows, bright reds and greens. Upon closer inspection, the realization came that someone had found the time, energy, and motivation to paint this glorious picture, using only handprints—and hadn’t even bothered to sign it. This was a wonderful example of creating art simply for the sheer joy of doing—and sharing with the world. Photo © 2009 Patricia Valentine; featured in the 2015 International Calendar