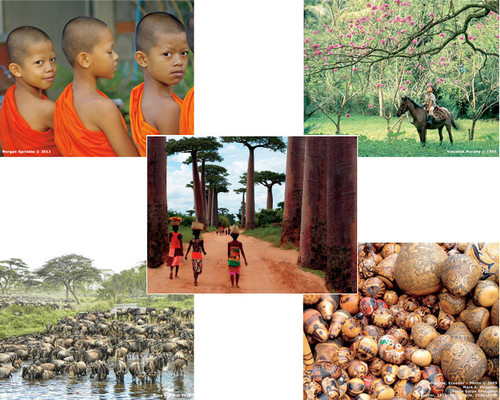 A combined set of five different notecards featuring beautiful photos from The International Calendar Project to help you stay in touch with faraway friends and family.

Combo Set C
Two of each of the following five notecards, and ten envelopes:

· Thailand: Thungyao, Trang Province, Thailand: To learn about Buddhism, Thai boys spend part of their summer vacation living and training with monks in Thailand's many temples. After early morning meditation, these boys walk with the monks through the village of Thungyao, waiting for food to be spooned into their bowls by villagers who, following Buddhist tradition, provide food to the monks as a way to make merit in the world. Photo © 2012 Morgan Sprinkle; featured in the 2016 International Calendar

· Honduras: Tela, Honduras: In a world of green, a boy pauses his horse to admire a flowering Macuelizo tree in the Lancetilla Botanical Garden in the Caribbean coastal town of Tela. Photo © 1995 Vincente Murphy; the International Calendar 2004 cover

· Madagascar Baobabs: According to Malagasy legend, the first baobab sprouted beside a small lake. As it grew, it noted the colorful flowers, large leaves, and slender trunks of the trees around it. One day the wind died away, leaving the water as smooth as a mirror. When the baobab saw its reflection, it was shocked to realize its own flowers were dull, its leaves were tiny, and its trunk grossly fat. The baobab complained to the creator, who responded by yanking the ingrate from the ground and replanting it upside down so that it could not see its reflection or complain. Since then, it has worked in silence, paying off its ancient transgression by providing fruit, medicinal leaves, and shelter for those who live nearby. Photo © 2011 Amber Brooke Davis; featured in the 2014 International Calendar

· Tanzania: Serengeti National Park, Tanzania: Herds of wildebeests, numbering in the hundreds of thousands, congregate at a watering hole to rest and drink their fill before continuing their northward migration to the adjoining Maasai Mara National Reserve in Kenya. The low sound of contented grunts and quiet mooing drifts through the dust kicked up by so many hooves. Photo © 2014 Mary Crave; featured in the 2015 International Calendar