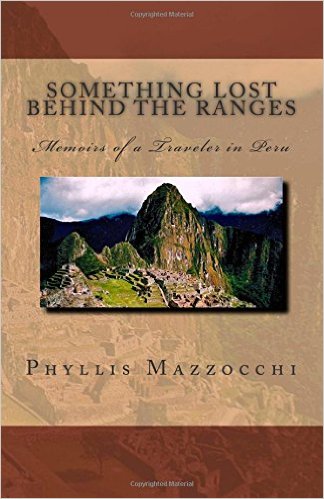 Something Lost Behind the Ranges: Memoirs of a Traveler in Peru
Phyllis Mazzocchi, 2012

Summary: Peru was in a "state of siege," Halley’s Comet was making its cyclical reappearance for the first time in 72 years, and the throngs of tourists that would soon elevate Machu Picchu to a major world tourist destination had not yet descended upon the Sacred Valley.

Before the luxury hotels, high-speed trains, and express helicopters, an independent traveler armed with a poem encounters the obstacles and rewards of a puzzled trail in the quest to reach Machu Picchu, the legendary "Lost City of the Incas." With travels through the highlands of Peru; including Cusco, Pisac, Ollantaytambo, Machu Picchu and Puno; and a circuitous route through La Paz, Copacabana and Lake Titicaca, Bolivia. Past and present converge in a story that is true for all times.

A 2012 Finalist for ForeWord Reviews Magazine Book of the Year, Travel Essays