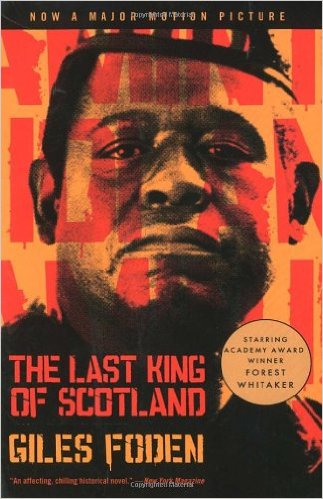 Summary: Shortly after his arrival in Uganda, Scottish doctor Nicholas Garrigan is called to the scene of a bizarre accident: Idi Amin, careening down a dirt road in his red Maserati, has run over a cow. When Garrigan tends to Amin, the dictator, in his obsession for all things Scottish, appoints him as his personal physician. And so begins a fateful dalliance with the central African leader, whose Emperor Jones-style autocracy would become a reign of terror.

In The Last King of Scotland Foden's Amin is as ridiculous as he is abhorrent: a grown man who must be burped like an infant, a self-proclaimed cannibalist who, at the end of his 8 years in power, would be responsible for 300,000 deaths. And as Garrigan awakens to his patient's baroque barbarism—and his own complicity in it—we enter a venturesome meditation on conscience, charisma, and the slow corruption of the human heart. Brilliantly written, comic and profound, The Last King of Scotland announces a major new talent.

REVIEWS:
Publishers Weekly: A vivid journey to the turbulent heart of 1970s Uganda, British journalist Foden's bracing first novel chronicles the strange career of a fictional Scottish physician, Nicholas Garrigan, who serves as the personal doctor and occasional confidante of dictator Idi Amin. Having sequestered himself on a remote island in Scotland, Garrigan reflects, through a fog of self-deception and regret, on his stint as Amin's sidekick, from their first unlikely encounter after a back-road accident (Amin's red Masarati sideswipes a cow) to his installation in the capital as the ruler's house physician. Enjoying the perks of this position, Garrigan ponders an affair with the British ambassador's wife, tends to Amin's sometimes comical afflictions (in a memorable scene, he coaxes a burp from the dictator as if he were a giant infant) and even admits to a "sneaking affection" for him. Garrigan grows so detached from the gradually mounting atrocities of the regime that it takes a visit to the dictator's torture chambers and a harrowing trek across the war-torn countryside for him to glimpse the extent of his own complicity. Expertly weaving together Amin's life story (intertwined with Scottish history for reasons that remain rather vague, though the novel's title is a moniker Amin gave to himself), Foden writes with steely clarity and a sharp satirical edge, allowing serious questions to surface about the ethical boundaries of medicine and the crumbling Western influence in Africa. Garrison is the perfect foil for Amin, whose overwhelming physical presence, peacock-ish rhetoric and cold-blooded savagery are so well captured as to make this novel more than a mesmerizing read: it is also a forceful account of a surrealistic and especially ugly chapter of modern history. Agent, A.P. Watt.

NOTE
This book has also been made into a film.